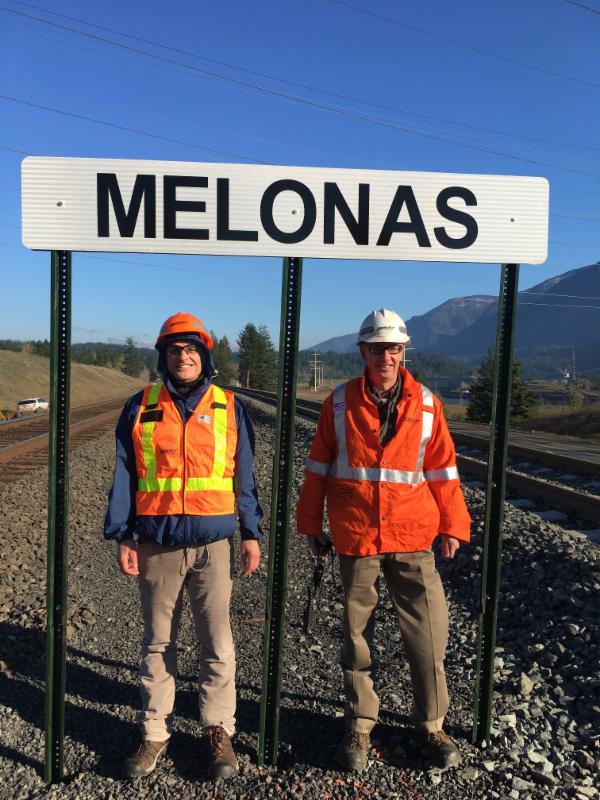 Sidings are a critical part of rail infrastructure. They help trains safely pass each other and increase rail line capacity. Each of these sidings have a name and it is an honor to have one of them named after you.  Recently, BNSF opened the new Melonas siding in the Columbia River Gorge, which is named after the Melonas family. Three generations of Melonas family members have contributed to the Spokane, Portland and Seattle (SP&S) and BNSF Railways.  Twin brothers, Gus and Louis Melonas were on hand for the sign unveiling. Gus has been with the railroad for over 40 years and has been the regional spokesman since 1985.  Louis is a welder in the maintenance department. Gus and Louis share the railroad legacy with their father, Sam-an SP&S senior officer and their grandfather-who helped build the railroad and cut the tunnels through the Fallbridge Subdivision, which is BNSF’s route through the Columbia River Gorge. This siding project consisted of constructing a new siding track adjacent to and south of the existing mainline track. It is about 2.08 miles in length. To learn more about this rail dedicated family, click HERE.

To learn more about the benefits of sidings, click HERE!