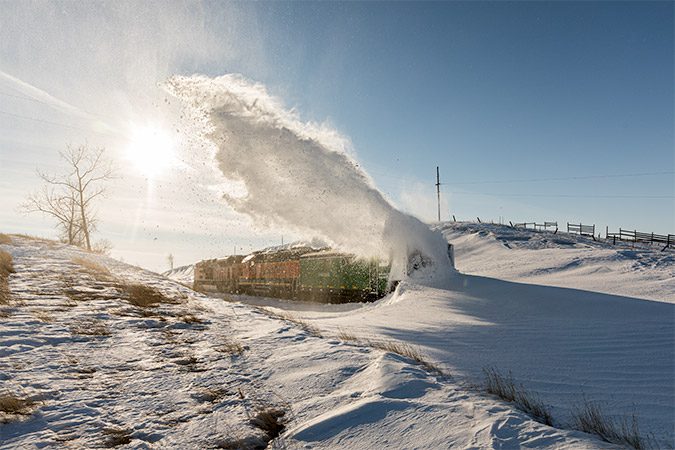 Weighing in at more than 150 tons and equipped with an 11-foot fan that can cut through deep snowdrifts, rotary snowplows play a crucial role in BNSF’s winter action plans. Rotary snowplows are used after dramatic snowfall events where snow volumes are deeper than the height of BNSF’s typical snowplow blades. BNSF’s regular snowplows can push snow to either side of the track as a train travels through snowdrift. However, snowpack in flatter landscapes can build up so high that this method becomes ineffective. That’s when BNSF’s rotary snowplows become invaluable.

Mechanical crews prepare the plows before the first of November and plows are fully stocked with cold weather equipment, including snow shovels and a generator to power the heater and provide lighting. The rotary plow is not self-propelled, so one or more locomotives are coupled behind to push the plow along the track. The slow-moving, snow-throwing rotaries were originally steam powered, debuting in American railroading in the 1880s. Those now in service with BNSF were originally built in the early 1900s for Northern Pacific and the Great Northern railroads and have since been modernized.