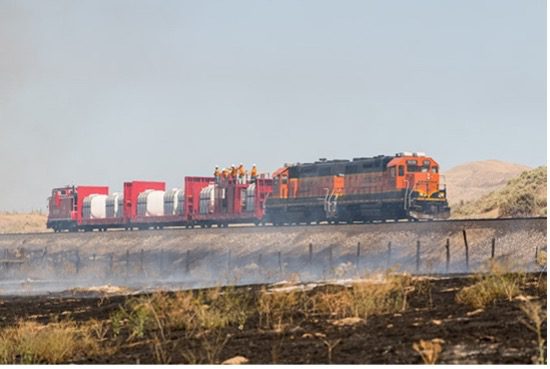 BNSF trains operate across much of the West, including areas where high winds and drought conditions can result in wildfires on or near tracks. BNSF takes steps to prevent fires but they often occur from other sources like lightning strikes, trespassers, etc., and the sooner they’re put out, the sooner train service can get back on track.

To combat wildfires, BNSF has tank cars full of water staged in areas prone to fire conditions. The trains are specially equipped to fight fires on BNSF tracks or structures as well as provide assistance to local fire departments. In addition to getting firefighters to places that firetrucks can’t access and where there are no water sources, BNSF’s fire trains can carry 30,000 gallons of water. By comparison, a firetruck averages 500 gallons of water.

“BNSF prepares to respond to all different types of weather related events – wildland fires are such an event,” said Danniel MacDonald, BNSF’s general director of line maintenance. “Multiple departments all work together – in a Wired Tight effort – to prepare and safely respond.  Communication and coordination with public agencies is key to our success.”