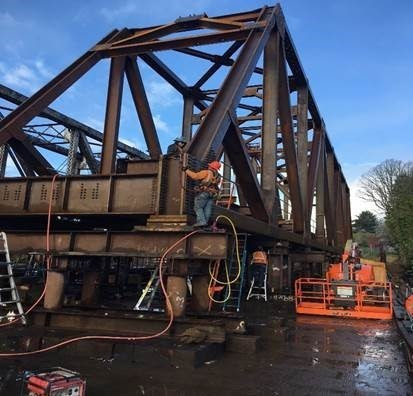 The Camas Bridge spans the Washougal River on BNSF’s Fallbridge Subdivision in southwest Washington. Approximately 15 miles east of Portland, Ore., the bridge supports a significant amount of traffic in and out of BNSF’s yard at Vancouver, Wash.

The bridge is part of BNSF’s Heavy Bridge program, where BNSF’s Engineering Structures team maintains infrastructure integrity, safety and reliability by making investments in major bridges to extend the lives of these essential assets.

“This project is a testament to hard work by dozens of Engineering and Transportation employees who worked diligently to accommodate this large-scale, 32-hour window and several smaller pre-construction preparation windows,” said Chris VanDeven, project engineer. The remaining three spans will be installed and track work will be completed in early June.