For more than 150 years, BNSF and predecessor railroads have partnered with the United States Armed Forces on military operations during war and peacetime.

Dating back to the Civil War (1861-1865), also referred to as “the first railroad war,” railroads have transported supplies and troops for deployment. Trains were a crucial new and innovative technology for both Union and Confederate forces as they moved men and supplies at a level never seen before.

Although moving troops via rail is a thing of the past, BNSF continues to ship the equipment needed to bolster our country’s defenses. Rail is a vital cog in the U.S. Armed Forces logistics machine and BNSF works daily with the military. That coordination is key to the Department of Defenses’ Railroads for National Defense Program, which makes sure the American rail network is ready to mobilize for defense deployment and urgent peacetime needs. The program works with the Federal Railroad Administration and freight railroads and established an expansive 33,000-mile interconnected national rail system called the Strategic Rail Corridor Network (STRACNET). It’s the nation’s vascular system that allows the military’s flow of defensible units from fort to seaport.
Moving heavy military equipment can be a tricky task, and each brigade movement is different. BNSF utilizes state-of-the-art chain tie-down flatcars that can adjust to carry large vehicles, as well as 20- to 40-foot containers, to ensure we can move the requested equipment. 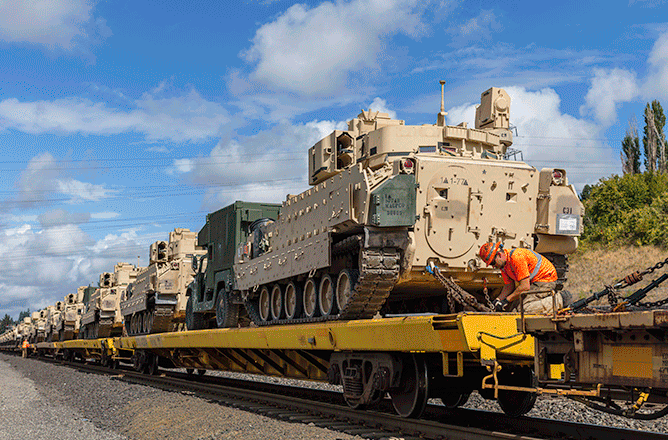