While resilience, fortitude, and the ability to adapt to challenging situations are always valued qualities, a year like 2020 has made these qualities essential.  BNSF recently held conversations with three employees in the Pacific Northwest who are veterans and whose experiences and “can do” attitudes make them uniquely qualified to thrive in the face of adversity.

Billy Nicewonger joined the military immediately out of high school and served as a tank platoon sergeant/commander in the Marine Corps. He left the military in 2019 and works as an Intermodal Equipment Operator for BNSF in Seattle. Billy explained that many of the challenges of 2020 are about uncertainty. He noted that his military experience and familiarity with working under a high level of stress taught him to adapt and overcome. 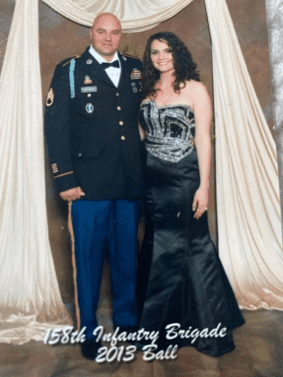 Staff Sergeant Traphagan and his wife celebrate at a 2013 event.

Travis Traphagan joined the Army in 2001 and served for 12 years and 8 months. He served in several positions, including deployments to Korea and Iraq, rising to the rank of Staff Sergeant.  He has been working for BNSF since 2013 and says that his military training has been an invaluable asset. As a locomotive engineer, safety, preparedness, teamwork and discipline are just as important in his current work as in the Army.

Ricky Woods joined the Air Force in 1982. Over his 30-year career, he served as an aircraft mechanic, a flight engineer, a senior flight evaluator and a squadron superintendent, eventually retiring as a Chief Master Sergeant. He was hired by BNSF in 2012 as a Train Master and sees similarities between working for the railway and serving in the military, such as safely moving cargo and crews from point to point. As Ricky puts it, “We all have a mission to accomplish which is to make sure everyone gets home safe.”

We gratefully thank and honor all the men and women of our armed forces for their service to our country.