While a number of monuments across the country commemorate the men and women who have served in our nation’s armed forces, there is no prominent monument in our nation’s capital to honor Native American veterans. This new memorial is designed to honor the essential military contributions of tribal members.

Chris Howell, BNSF’s Director of Tribal Relations, indicates that board members of the BNSF Foundation are enthusiastic about supporting this important new monument. “Quanah Spencer and I have done extensive outreach to tribal communities and one of the greatest links we’ve created is helping them honor veterans within their tribes,” said Howell. “We are honored to be a part of this fundraising effort.” 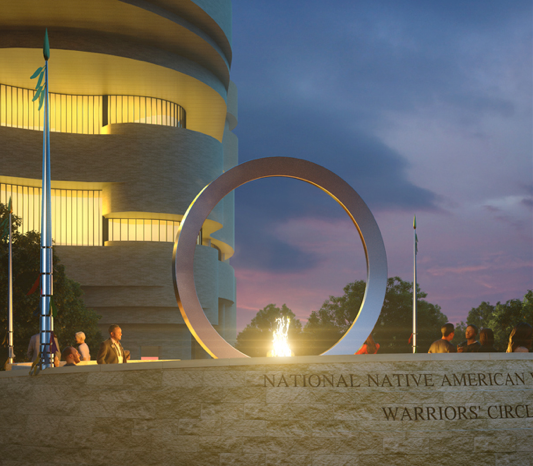 The BNSF Railway Foundation has donated $500,000 to the project. The design concept for the memorial, titled “Warriors’ Circle of Honor,” was created by Harvey Pratt, a self-taught artist from Oklahoma who served in Vietnam from 1962 to 1965. Groundbreaking is slated for Sept. 21, 2019, and a dedication is planned for Veterans Day 2020.

The BNSF Tribal Relations team is the first in the industry and was established to build and strengthen ties with the many diverse tribal nations within the BNSF railroad network. The team also works to foster within BNSF a greater cultural understanding of these tribal nations, their rights and governance and cultural issues. In reaching out to the 86 tribal governments and leaders that BNSF touches, the Tribal Relations team has established a high standard in the industry for the future of corporate-to-tribal communication and relationship building.

“The National Museum of the American Indian is proud to build the National Native American Veterans Memorial, which will honor the service of American Indians, Alaska Natives and Native Hawaiians to this county and its armed forces,” said Kevin Gover (Pawnee), director of the museum. “We are extremely grateful to BNSF Railway Foundation for their generous gift to this effort. With this support, we will create a space in our nation’s capital where everyone can come to honor and reflect on the sacrifices these men and women and their families have made for this country.”

If you are interested in more information about the memorial or would like to donate to the project, visit the National Museum of the American Indian website.